While post apartheid South Africa has been a miracle of forgiveness and reconciliation, there are still some elements of our society who harbour prejudice deep within their hearts and especially with the aid of a few beers it can sometimes burst through the façade as seen here with this group of young drunken white louts and their obvious contempt towards the black vendor. 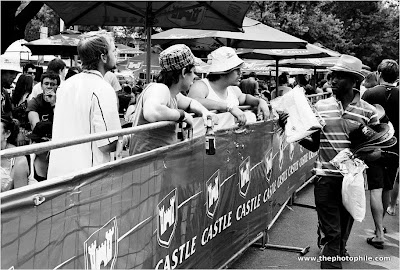 I took this photo while at the Aardklop Cultural Festival in Potchefstroom, a smaller town in the Northwest Province. The festival just seemed to be an excuse for wanton drunkenness and crude behaviour. I won't be back.

Thank God that overall the majority of South Africans of all races have set aside their differences and live in a state of harmony that still astounds me! And just to set the record straight, there are also a similar minority of loud black voices who harbour the same prejudices against white people. I pray they will eventually change and get with the program, or simply shut up.