Some of you may remember that a while back I made my own flash diffuser. The original post is here. Well, I am sad to say that it was a dismal failure! In fact I couldn't tell the difference between photos taken with or without my diffusion disaster... at least it didn't cost me anything!

But for some time now I have wanted to build something more effective, a Strobist DIY Beauty Dish! Woohoo! But would it work?

I first cut a hole with the Stanley knife the right size to fit my SB600 flash jammed into the bottom of the flower pot.

Then I cut a corresponding hole into the bottom of the CD spindle case. It was quite tough as the plastic was harder than the flower pot and a slip would have meant a trip to the hospital for stitches. Be very careful!

I then mounted the CD spindle bottom onto the inside of the pot lining up the holes correctly so that the flash unit could be easily inserted. I drilled 4mm holes through both the pot and the CD spindle bottom and pop riveted both together making sure I used washers front and back to strengthen the joints. I want this baby to last.

Then I took the whole lot outside and spray painted the back of the pot black and the inside white. I tried to do as good a job as I could because I want the end result to look as presentable as possible.

Then I riveted an appropriately cut to size plastic circle to the outside of the CD case spindle lid just to make it all look nice. Then I glued a CD with the shiny side down (towards the flash hole) into the inside of the CD spindle cover with the white silicon. 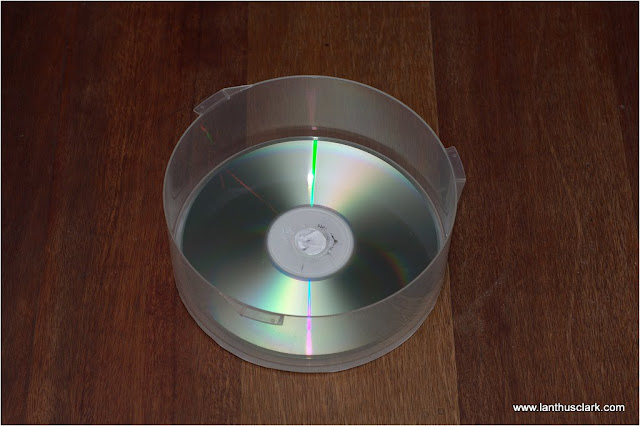 Above is the CD spindle cover with CD glued to the inside.
(Edit: I found the convex mirror I was looking for!) 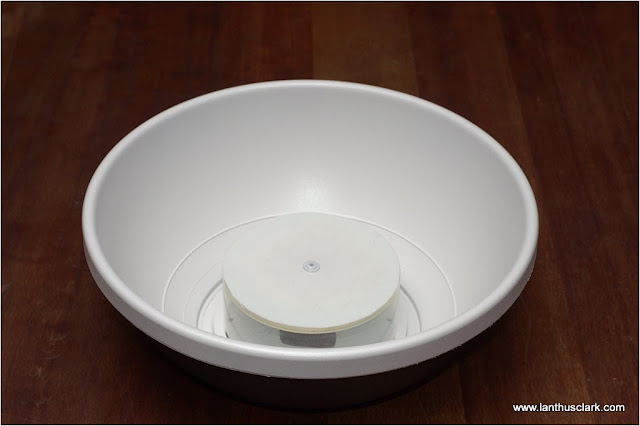 This is the dish with the CD spindle mounted into the dish. 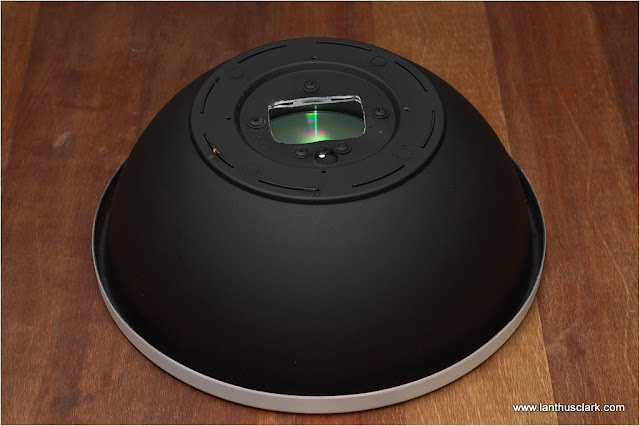 And this is what it looks like from behind. Note the CD shining through the hole. This is what will bounce the flash back and hopefully into the white dish. (Compare this with the same pic at the bottom of this post that has high density foam mounted to the flash entry hole)

This whole process was actually quite quick, maybe 30 minutes (with quick dry spray paint) and was very easy, even for a non DIY guy like me!

Here is the whole setup mounted onto my flash and firing via Nikon's clever wireless flash system: 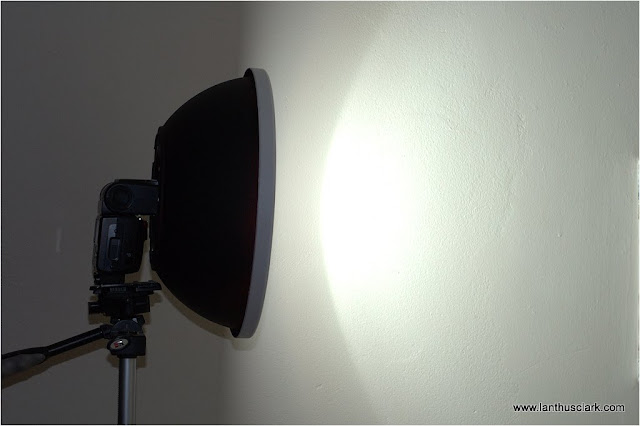 Just to show how the Strobist Beauty Dish spreads the light, below is the same flash, sans Dish closer to the wall and still not getting as much light onto the wall! Most of the light is just going straight forward, which is why we want to diffuse it to start off with: 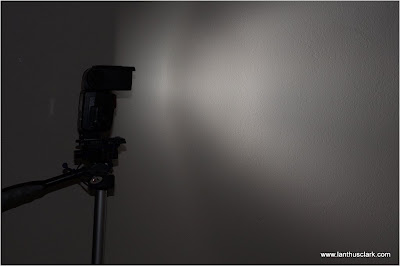 And with Dish from the front: 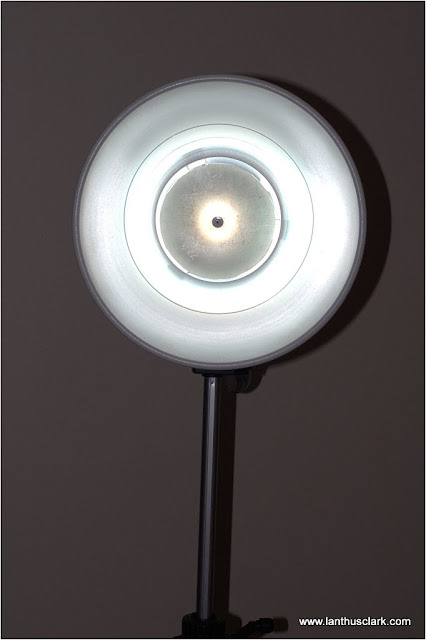 The big question of course is whether this would be more successful than my last attempt at DIY flash diffusion. So I took it to my specially prepared test range and tried it out. Guess what? It worked! 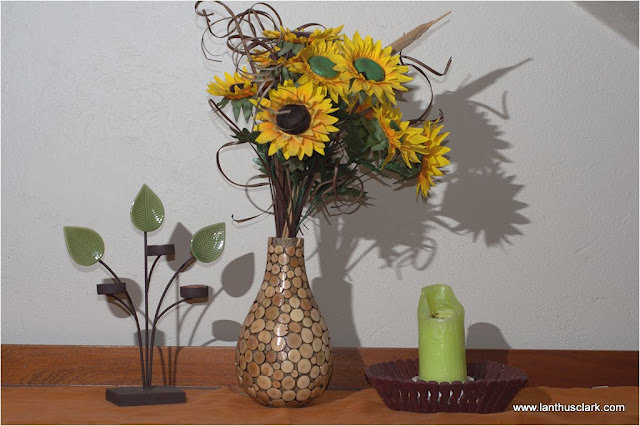 First with direct flash. Check out the harsh shadows on the wall behind the subject! 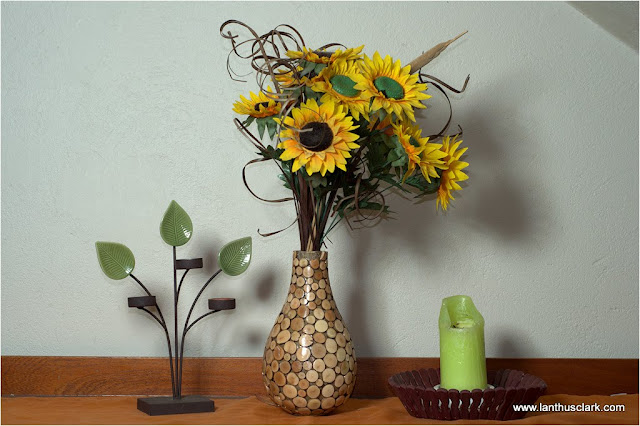 But oh, how those shadows have just melted into glorious diffusion with the Strobist DIY Beauty Dish mounted! Also, I am not quite sure why, but this photo just seems to have better colour and contrast than the direct flash. Maybe it's just me...

So, I'll chalk this one up as a success!

There are a few improvements I would like to make however, after all this is just my "prototype". First off I would like to get a small convex mirror and mount it into the CD case spindle lid where the CD is now and see if that reflects the flash a little better. And secondly I want to improve the flash mount on the back of the dish for both practicalities sake and to make it look better.

So there you have it, a Strobist DIY Beauty Dish in less than an hour from common goods that most people have just lying around the house or in the garage.

I can't take all the credit to myself however, here are some sites I referenced during my research into how to make it:
http://www.flickr.com/groups/strobist/discuss/72157604541039854/
http://www.imageguy.com/make-your-own-beauty-dish/
http://davidtejada.blogspot.com/2008/04/beauty-dish-for-sb-800.html


Edit: (23-10-2010)
To satisfy the curiosity of my friend Olesku.pl, who asked a question below, I shot the same scene with my shoot through umbrella. For the sake of science I kept the same position, same distance from subject and same camera settings (I shot this in manual), and the results were quite interesting. While the diffusion of the umbrella is really good, the amount of light getting through to the subject is a few stops less! Therefore the photograph is underexposed. 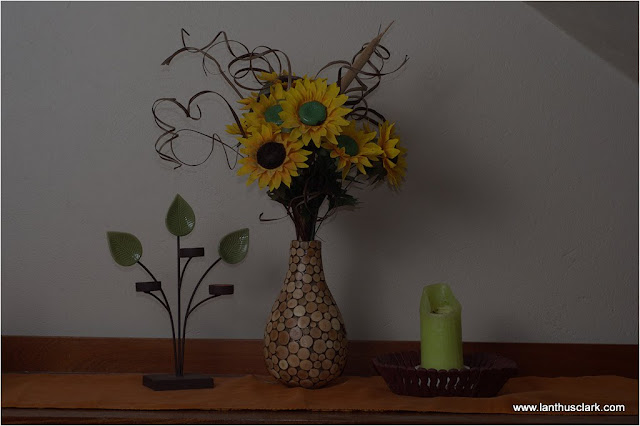 While I could change my settings and get a better result, I decided to post the original pic here just to show that the Strobist DIY Beauty Dish has one clear advantage, it lets through much more light, and more light in photography is always a good thing. Oh, it has two more advantages over the umbrella, it cost nothing to make and it was fun making it too! So a few pluses for the Beauty Dish. ;-)

That's not to say the umbrella is bad, it isn't, because as you could see it diffuses the light really well, (better than the dish in fact) it just needs to be used a little differently. I think the point that Olesku.pl wanted to make is that the umbrella is better at diffusion, and he was quite right!

Thanks for the question Olesku.pl, I just learnt something new!

Edit 2: (25-10-2010)
One of the two last things I wanted to do I managed to get done today! I mounted some high density foam at the flash hole in the rear of my Strobist DIY Beauty Dish to provide an easy mount for the flash like so: 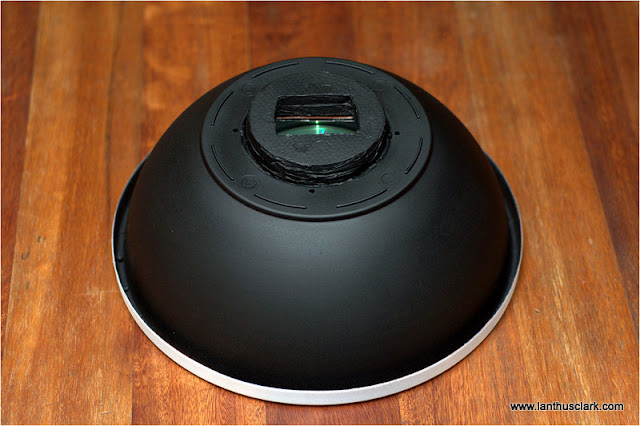 Now for that convex mirror... anybody know where I can get one in South Africa? (Edit: Got one!)

Edit 3: (26-10-2010)
Ok, I found out that Midas (a motor spares retail chain in South Africa) stocks the convex mirror I need! Yeehaw! Should be here by Thursday! Will post a pic as soon as it is glued in and ready to use. (Edit: Got one!)
Posted by Lanthus Clark